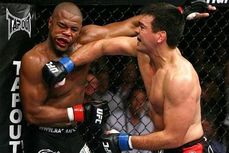 With the background that I have in stand up fighting and the knowledge and experience that I have compiled over the years it never ceases to amaze me when I see many top level MMA fighters stand there and slug it out with descent but not necessarily top level striking skills. These guys are at the top of their game in what is one of the the fastest growing new sports. I see when their opponents are potentially wide open for a few basic techniques that if practiced regularly with some good coaching would make a significant difference. This is where I could help you excell if you are an MMA fighter.
MMA fighters  are among some of the most well conditioned athletes on the planet. Why? Because we live in 21st century America, and there is easy access to and availability of a variety of sports conditioning sciences. We also have wrestling programs in our high schools and colleges and BJJ schools on every other corner. MMA fighters understand the necessity of conditioning. The problem is what they are conditioning themselves to do. If you are spending most of your energy doing movements that are not precision fighting movements (I am talking about striking) then you are not training optimally for striking in the ring or cage.

What is needed is an effective cross breeding / overlapping of the most effective styles of wrestling, ground striking, submissions, and stand up striking.  Submission training has a relatively quick learning curve because there is minimal training gear needed and it is very hands on. But top level striking training requires more specialized training knowledge, equipment, and training/coaching skills. Esspecially when it comes to Muay Thai there are relatively few schools with high level training in America.
I like to use the best examples in each style to set a standard of excellence to shoot for. For example in boxing /punching I look to the best in the game. Sugar ray Leonard, Roberto Duran, Manny Paquiao, etc. And study the way they train and fight.

I have specialized knowledge in Dutch style Muay Thai. I had the privilege of training with a Dutch style Muay Thai master for a number of years and learned many of the secrets of their style of training. The Dutch style fighter’s trademark is the power low kick. Dutch teams have traveled to Thailand and knocked out every one of their opponents with kicks to the leg. Ramond Dekkers and Rob Kaman are the Iconic fighters that I point to as examples for Dutch style Muay Thai. People often see fighters executing a devastating kick or punch but don’t really know what it took to develop those skills. The secret weapon that I learned from fighters from the Netherlands is the way they train. This is what I have coined; Attack Response Impact Training.

The reason many MMA fighters have crude striking skills is that developing them is a rather intensive and time consuming process. The basics have to be taught with precision and practiced regularly with patience. You need skilled sparring and drilling partners to challenge you and bring out the best in you.   In Thailand the fighters spend most of their time doing fighting /striking exercises along with clinch wrestling because that’s what they are going to be doing in the ring. They understand that perfect technique practiced regularly with other highly skilled fighters produces the best results. Lets use Olympic athletes as an example. The average Olympic athlete has spent 4 hours a day 300 days a year for 6 years perfecting their game before becoming a medalist.

Muay Thai fighters throw hundreds of kicks, punches, knees and elbows every workout. They simulate real fighting situations very closely and realistically. I often see two MMA fighters stand there and slug it out mangling their faces up with 6oz open fingered gloves. They often forget the kicks knees and elbows and just slug it out with their fists. They often say kicking takes too much energy and are not effective. Well they feel that way because their kicks (are) ineffective and result in being a waste of energy.  The reason for this is because most don’t train them properly.  They don’t train them properly because there are very few trainers in America who really know how to effectively combine the various training techniques together.
The conditioning aspect of Muay Thai training is something that the average MMA gym doesnt really have.  This is what I am here to do. Upgrade the standard of striking for the sport of MMA and young aspiring fighters.