To win at International level amateur boxing requires a different set of skills than professional boxing. Professional boxers can take their time and feel their opponents out because they have many rounds with which to do it. The refereeing is much more lenient on penalizing fouls and you can get away with a lot more borderline “dirty” infighting techniques than you can in amateur boxing. Amateur boxing is much more strict when it comes to penalizing fouls. You also have less time to adjust to your opponent and have to be more careful with how you plan your offense and defense. You have to be acutely attuned at all times and 100 % focused. You also have to be very fast and have good reflexes. This basically translates into your technique having to be cleaner and more efficient. Sound boxing skills and cleverness are more necessary to win in amateur boxing because you are not allowed to do many of the things that you can get away with in professional style boxing. This is what our Olympic style boxing training program is all about. 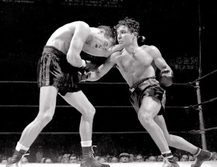 My philosophy about the sport aspect of fighting is that if you are going to get into the ring or cage with the possibility of getting knocked unconscious or having your face bruised and bleeding, it would make sense to be as well prepared as possible before entering into such a venture.  I don’t get into the ring because I “just love to fight” as some fighters say. I do it because I love to win. Some say winning isn’t everything. True but if you lose you had better learn something from it. I play to win. I hate losing and I love winning. Especially the big fights. That's why I fight. Because I love the thrill of victory in the face of agonizing defeat.  It gives me a thrill when I can show that I am better than the other top fighters out there.  I can show people the reason why I put in so much work.  Bottom line is losing is only for learning how to not lose next time. I have been fortunate to have never really lost in a significant way.  Now what I love to do is teach other fighters how to be winners.  Ric-

When you hear of the "Fab Four" do you think of the Beatles? Well I think of boxing. Maybe I am biased because I was raised during one of the greatest boxing era's, the 80's. But I have yet to recall a time when there were so many great build up matches that led to super fights.

The best examples of great boxing skills should be sought after by going to the greatest boxers... Manny Pacquiao's  extremely fast footwork and shadow boxing skills.

The future of boxing...

The greatest boxer vs puncher match up of all time

One of the slickest fighters of all time

One of the greatest non stop punching machines, Aaron Prior.